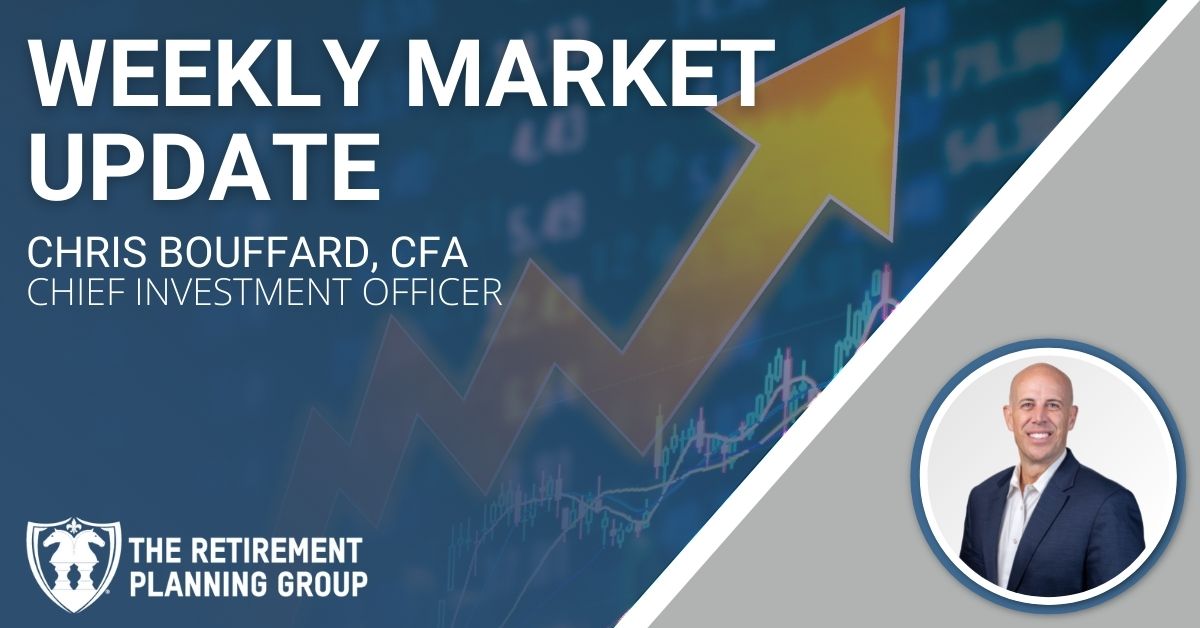 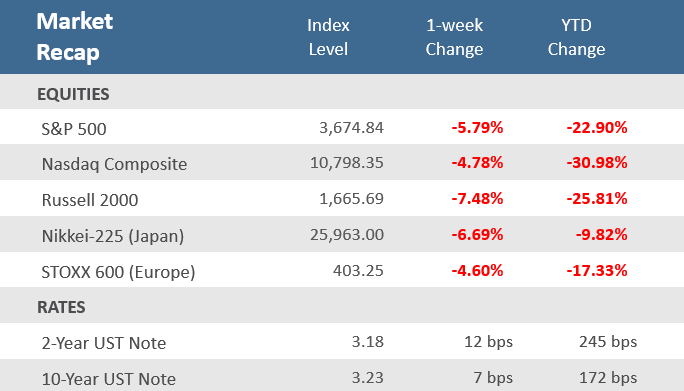 The selloff that racked the market on Thursday and Friday, June 9th and 10th got even worse this past week, with the S&P 500 having its worst week since 2020 putting it at its lowest level in more than a year — and into official bear market territory. It was the tenth weekly loss in the last eleven for the S&P 500 and recession risks continue to rise following mostly weaker-than-expected economic data and a wave of monetary tightening by global central banks, including the Federal Reserve’s largest rate increase since 1994, a 0.75 percentage point hike. The central banks of England, Switzerland, Taiwan, and Brazil all hiked rates as inflation remains elevated globally. The global monetary tightening comes amid already slowing economic growth which has been exacerbated by COVID lockdowns in China and the ongoing Russia-Ukraine war. Retail sales were softer than expected for May, June manufacturing activity in the New York and Philadelphia regions unexpectedly fell into contraction, and homebuilder sentiment hit a two-year low in June, while May building permits and housing starts both fell more than expected as rapidly rising interest rates weigh on the housing market. The S&P 500 fell -5.8% for the week, with all 11 of its sectors finishing more than -15% below their recent highs. The energy sector has been the leader among sectors all year but saw heavy profit-taking over the last week sending it down -17.2%. It is still the best-performing sector this year, up +32.4% despite the heavy loss last week. The 30-stock Dow Jones Industrial Average was down -4.8% and closed under the 30,000 mark after dipping below that level on Thursday for the first time since January 2021. The tech-heavy Nasdaq Composite also slipped -4.8%. Small cap stocks were the biggest laggards, falling -7.5% for the week and sending it lower than it was pre-covid.

Treasury bonds fell and yields moved higher, with the 10-year Treasury yield finishing up 7 basis points (bps) at 3.23%. The yield curve flattened further as the 2-year Treasury yield gained 12 bps to close at 3.18%. The yield on the 2-year Treasury note traded as high as 3.44% midweek which was the highest level since 2007. The 10-year note yield flirted with 3.50%, matching its March 2011 peak. The closely watched 2-year/10-year yield curve inverted several times before rebounding toward the end of the week. The broad bond market Bloomberg Aggregate Bond Index finished down -0.9% for the week, putting it down -11.5% in 2022. Still, that was the best performance of major asset classes for the week.

Outside stocks and bonds, crude oil prices pulled back to $110.27 after hitting a multi-decade high of $120.50 last week. The U.S. dollar continued to climb, posting a fresh twenty-year high. The Financial Times reported that the strong U.S. dollar is expected to reduce the earnings of U.S. multinational companies by about $40 billion in the first half of 2022. Gold was lower despite the inflation concerns as the stronger dollar and interest rate hikes by major central banks dented its appeal (gold yields no interest). A big story during the week was a collapse in cryptocurrency prices following news that decentralized finance platform and lender Celsius had suspended customer withdrawals and transfers. That drove some panicky selling and margin calls that lasted all week. Bitcoin started the week just above $25,000.00 and was just above $20,000 as of this writing. Since hitting an all-time high of around $69,000 in November, bitcoin has tumbled about -70%.

The Federal Open Market Committee (FOMC) concluded its two-day monetary policy meeting on Wednesday with the largest interest rate increase since 1994 and signaled it would continue lifting rates this year at the most rapid pace in decades as it races to slow the economy and combat inflation that is running at a 40-year high. The FOMC raised the target for the Fed funds rate by 75 basis points (bps) to a range of 1.50% to 1.75%. Despite the sharp increase, the Committee painted an optimistic picture of the economy, noting that, “Overall economic activity appears to have picked up after edging down in the first quarter,” and “Job gains have been robust in recent months, and the unemployment rate has remained low.” However, the Committee cited supply and demand imbalances related to the pandemic, higher energy prices, the ongoing supply chain disruptions, as well as the continued war in Ukraine as putting upward pressure on inflation and weighing on global economic growth. It also said it will maintain its plans of reducing its balance sheet via its holdings of Treasury securities and agency debt and agency mortgage-backed securities. The Committee revised its GDP forecast for this year down to 1.7% from 2.8% in March, and adjusted 2023 downward by 0.5% to growth of 1.7% and 2024 to 1.9% from March’s estimate of 2.0%. It also revised its inflation outlook up for this year, to 5.2% from the previous estimate of 4.3%, and 2023 and 2024 saw slight upward revisions. In his post-announcement press conference, Chairman Jerome Powell said that the employment remains tight and that inflation is too high, with last week’s four decade high Consumer Price Index (CPI) pushing the Committee to do “more front-loading” in regards to interest rate increases. He indicated that future rate hikes of 50 bps and 75 bps are “most likely” at the upcoming meetings but reiterated that such decision will be data-dependent. 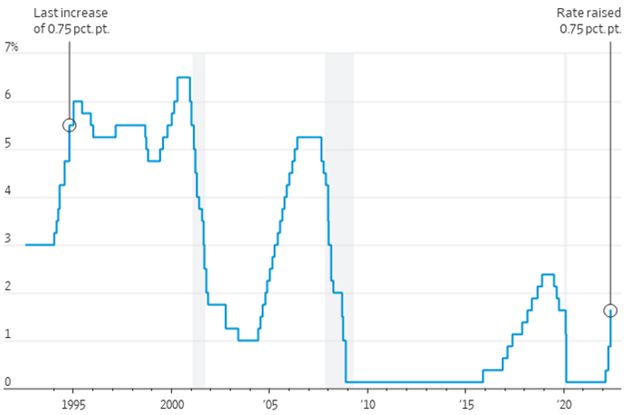 In a shortened week due to Monday’s Juneteenth observation, the economic calendar will be lighter, but the docket still has some data points of note with existing and new home sales, which have seen slowing activity amid the drop in housing affordability due to surging prices and spiking mortgage rates. The Chicago Fed National Activity Index and the June preliminary Manufacturing and Services PMIs from S&P Global will be watched closely for signals of economy growth. The revision to the June University of Michigan Consumer Sentiment Index comes late in the week, its preliminarily reading tumbled to a record low last week on inflation concerns. Federal Reserve members will be speaking again after last week’s FOMC hike, headlined by the two-day semi-annual Congressional testimony from Chairman Jerome Powell.

FIRST TOILET PAPER. THEN BABY FORMULA. NOW HOT SAUCE. – The maker of one of the U.S.’s most beloved condiments—Huy Fong Foods—has been forced to suspend production of its iconic spicy sauces due to a shortage of chili peppers. The company confirmed Wednesday that a shortage of peppers in its inventory had affected production of Sriracha Hot Chili Sauce, Chili Garlic and Sambal Oele (source: Bloomberg).

SPENDING MORE, SAVING LESS – The nation’s personal savings rate, which soared during the early months of the pandemic, has now fallen back to below its pre-pandemic levels. The savings rate was 7.8% in January 2020, rose to 33.8% in April 2020, and now has dropped back to 4.4% in April 2022. The 4.4% rate is the lowest recorded in the United States since September 2008 (source: Bureau of Economic Analysis, BTN Research).

FUNDING A RETIREMENT – The S&P 500 has averaged +9.8% per year (total return) over the 25 years ending 12/31/2021. A lump-sum of $865,656 (in a pre-tax account) will sustain a 20-year payout of $100,000 per year (i.e., $2 million of gross distributions before taxes) assuming the funds continue to earn +9.8% annually. This mathematical calculation ignores the ultimate impact of taxes on the account which are due upon withdrawal, is for illustrative purposes only, and is not intended to reflect any specific investment or performance. Actual results will fluctuate with market conditions and will vary (source: BTN Research).

LARGEST SECURITIES FRAUD BUST IN US HISTORY – On June 14, 2000, members of all five New York City Mafia crime families were indicted for allegedly participating in a securities fraud scheme. The FBI and SEC conducted the largest securities fraud bust in history, indicting 120 people, including Mafia members, securities dealers and even the treasurer of New York City’s police detectives pension fund on charges ranging from racketeering to securities fraud to solicitation to commit murder. The accusations stemmed from an investigation codenamed Operation Uptick, in which authorities said participants manipulated the trading activity of 19 microcap stocks and defrauded investors out of $50 million. The list of 120 indictments for the vast pump-and-dump scheme included 11 alleged members of Mafia families, 57 licensed and unlicensed stockbrokers, 12 stock promoters, 30 officers or company insiders, two accountants, an attorney, an investment advisor and a hedge fund manager (source: Bezinga).