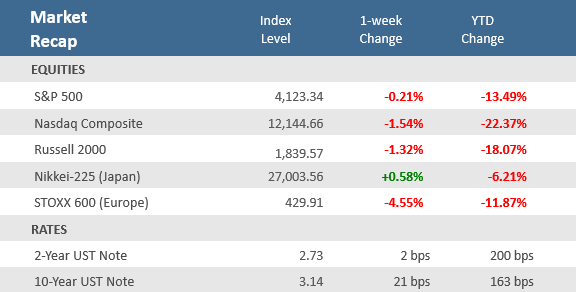 The first week of May is in the books, and jittery markets, rising rates, and increased economic uncertainty persists as primary headwinds for markets. For anybody that took the week off and didn’t check stock prices it looked like a rather uneventful week, with the S&P 500 down -0.2%, or essentially flat. But for those following the action, it was anything but a reprieve from the frenetic market swings in the first four months of 2022. Monday, the first trading day of May, saw the S&P 500 sink to its lowest levels of the year before staging a last hour comeback to close positive for the day. It was a rather stunning relief rally after the S&P 500 just completed its worst monthly performance since March 2020. The tech-heavy Nasdaq climbed +1.6% on the day, following its worst month since 2008. Stocks built on Monday’s late day rally on Tuesday with modest gains and then leapt higher on Wednesday. Fed chairman Jerome Powell delivered the expected 50 basis point rate hike Wednesday afternoon, but then he said they were not looking to raise rates in 75 basis point increments in the coming months, an unexpectedly dovish admission. The S&P 500 surged +3.0% by the end of the day for its best single day return since jumping +3.2% on May 18, 2020. But in true 2022 fashion, the exuberance ended there. Thursday brought a relentless and broad-based sell-off (more than 90% of the S&P 500 constituents fell), in which the index registered a one-day route of -3.57%, almost matching the -3.63% plunge on April 29, which was the worst single day pullback since June 11, 2020. Stocks slipped a bit more on Friday to make it five consecutive weekly declines, the longest weekly losing stretch since June 2011.

The yield on the benchmark 10-year Treasury note rose 21 basis point over the week to end at 3.14%. Yields move inversely to prices and 1 basis point is equal to 0.01%. On Monday the yield on the 10-year Treasury breached 3% for the first time since 2018. The move back to the 3% level has been swift after ending 2021 near 1.5%. The surge in Treasury yields has resulted in higher mortgage rates and other long-term loans, which could pose a hurdle for further economic growth. Higher bond yields also create competition for stocks, making them less of a relative bargain than when rates were near zero. Of course, there’s no way to know just how high rates may go, a lot of that will depend on how persistent inflation turns out to be, how tight the labor market will stay, and whether supply chain issues can get resolved.

Q1 earnings season is winding down, with about 436 of the S&P 500 companies having now reported. Thus far, roughly 67% have beat sales expectations and about 78% have beat earnings expectation, with blended earnings per share (which combines reported data with estimates for those that have yet to report) shows that earnings growth is up +8.6% while sales growth is up about +13.4% compared with the same quarter a year ago, according to data from FactSet Research. Overall, FactSet’s data shows that the percentage of S&P 500 companies beating EPS estimates is above the five-year average, but the magnitude of these positive surprises is below the five-year average. As a result, the index is reporting higher earnings for the first quarter today relative to the end of last quarter. However, the index is also reporting single-digit earnings growth for the first time since Q4-2020. So, while earnings growth remains positive and above trend, the rate of growth has decelerated, and that combined with higher inflation and interest rates is why stocks with high valuations, like technology and growth, have seen the sharpest declines this year.

On Tuesday the Labor Department reported its Job Openings and Labor Turnover Survey (JOLTS), a measure of unmet demand for labor. It showed that jobs available to be filled increased 205,000 to 11.55 million in March, which was up from February’s upwardly-revised 11.34 million and above expectations for 11.20 million. That’s also a fresh record high for data that goes back to December 2000. The report showed the hiring rate remained at 4.5% in February, and job separations increased to 4.2% from 4.0% the prior month. The quit rate rose to 3.0% from February’s 2.9% pace—a new all-time high at 4.54 million positions. The gap between open jobs and available workers hit 5.6 million, another new high. 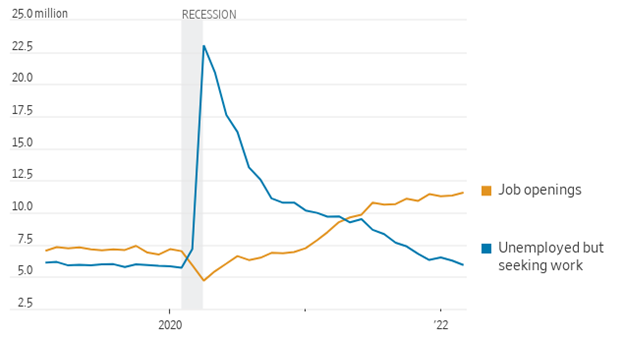 The calendar is quite light in the week ahead with inflation reports, both consumer (CPI) and producer (PPI), certain to be in focus. The April consumer price index is expected it to come in slightly below March’s 8.5%, signaling inflation may have peaked. We will also get a read on sentiment among small businesses with the NFIB Small Business Optimism Index, as well as consumers from the May preliminary University of Michigan Consumer Sentiment Index. Earnings season begins to wind down with about 10% of S&P 500 companies left to report. There are a host of Fed officials slated to speak in the wake of this week’s policy decision.

IS INFLATION THE REASON? – The U.S. economy shrunk by an annualized -1.4% during the Q1- 2022, an 8.3 percentage point swing from +6.9% annualized growth recorded in the Q4-2021. Other than the volatile swings in growth in 2020 during the first year of the pandemic, the U.S. has not seen an 8.3 percentage point quarterly downward swing in the size of the economy since the Q4-1981 or 40 years ago when the economy went from a +4.9% growth rate to a -4.3% contraction quarter-over-quarter (source: Commerce Department, BTN Research).

ABOUT HALF – U.S. inflation, measured by the Consumer Price Index (CPI), was up +7.0% during 2021. Three percentage points (out of the 7 percentage points) is a function of direct fiscal support from the US government and how American households spent the pandemic-related money (source: Federal Reserve Bank of SF, BTN Research).

PEAK CRUDE – The highest level of crude oil production in U.S. history was 13.1 million barrels a day as of Friday 3/13/2020, the day President Donald Trump declared a national emergency due to the pandemic. As of Friday 4/22/2022, our national production of crude oil was 11.9 million barrels a day (source: Energy Information Administration, BTN Research).

MAGELLAN FUND’S BIRTHDAY – On May 2 in 1963, Edward C. Johnson II, the head of Fidelity Investments, started a small mutual fund and gave it to his son, Ned, to run.  He called it the Magellan Fund. Magellan became perhaps the world’s best-known actively managed mutual fund, known particularly for its record-setting growth under the management of Peter Lynch from 1977 to 1990. Lynch averaged gains of +29% per year to crush the S&P 500 index by nearly 14% per year. For years it was the single largest mutual fund in the world until April 2000, when it was displaced by Vanguard’s S&P 500 index fund (source: Bloomberg, The Wall Street Journal). 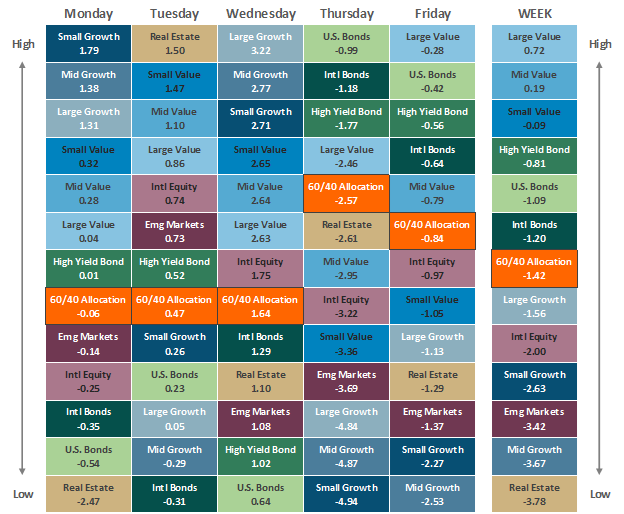